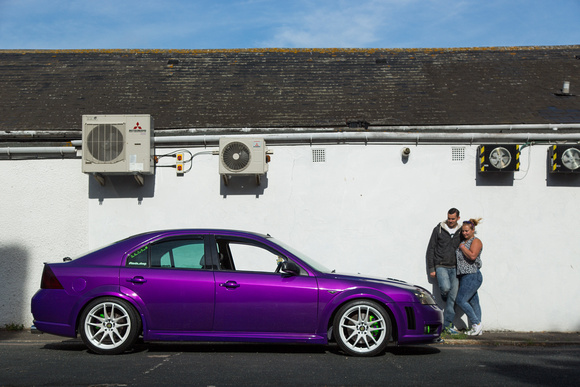 It started life a Performance blue 220 but Darren had other plans and gave it to Kode Performance in Sheerness to work their magic.  So lets start with the obvious, this ST220 is not in your average colour, the colour is called 'Deep Base Pearl Purple Velvet' (I wonder if they call it DBPPV for short?) off topic I know sorry... getting back to it - its epic. To describe it, it short of shifts tone as you move around the car, having followed the car around on the shoot I can say the colour is quiet a head turner.  Ironically the next thing the stands out is the sound track of this beast, even when poodling around this car is not shy, on over run she pops like small firearm which is unexpected from a Mondeo and then there is the styling. Putting aside the colour there are a number of details that only a trained eye would catch like in the inside of the vents are painted green to match the engine bay and breaks, and the is a tiny strip of carbon on the back bumper that ties in the lower bumper with the upper lip spoiler all add to the small details that tie the car together.

So lets talk about the arches?

Yes they are wider but don't look overly extreme and are deliberately in keeping to the original design, some people will have to look twice as there is a clear difference just not an obvious one, its common to here people say "that's not normal... is it?" or "is that a little wider?".  From the back she looks clearly fatter and it has to be to accommodate the massive Kode 9.5j alloys sat under the on the rear.

Darren wanted a one off and to my eye has accomplished that already...

That being said he assures me he has more up his sleeve for this car so you can expect to see more of her in the future.

What do you all think of her?

Catch you all soon,